A Troubled Boy’s Search for Peace 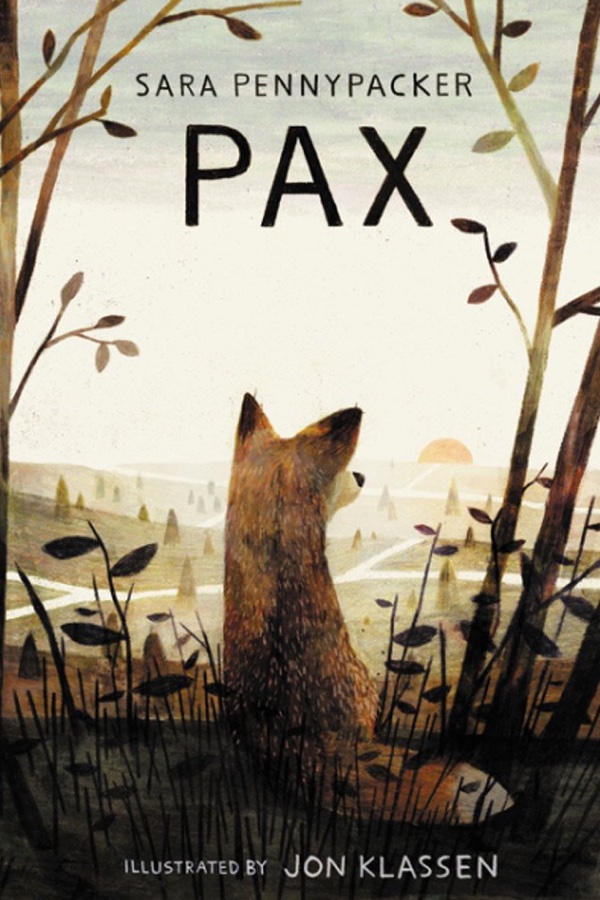 Devastating war has come to Peter’s home. It’s forcing his father into military service, which means that the young boy, whose mother died tragically years before, must leave his town and go to live with his grandfather hundreds of miles away. Even worse though, the war and his father force Peter to abandon Pax, his pet fox, with whom he has been inseparable for years.

Sara Pennypacker’s emotional novel Pax follows the separate journeys of these two intimate friends as they attempt to reunite. Ever since his mother was killed in an automobile accident, anxiety and guilt have crippled Peter. His only comforts during the most suffocating attacks are the soothings and playful distractions of his pet, who can always sense the onset of such episodes. Leaving Pax on the side of an old dirt road on their way to his grandfather’s house, Peter is forced to abandon not only his best friend, but also, quite obviously considering the name, a source of great personal peace. When he realizes later the severity of what has happened, Peter sets out on a quest to regain Pax.

Despite what appears as a moment of weakness and broken loyalty from his boy, Pax remains steadfast in his devotion to Peter even days after he chased his family’s car in vain up the unpaved, wooded road. It isn’t until he meets two other foxes, Bristle and Runt, that Pax finally leaves the spot where he last saw Peter, giving in to fatigue, hunger, and thirst, and follows them towards their den. Hateful and distrusting of humans, it is the young vixen, Bristle, who drives Pax’s half of the plot, forcing him to defend his belief that humans can still be good. She and her skulk have been ravaged by humans in the past and, now their valley home is threatened by the coming battle.

Peter, too, encounters an individual who challenges him along his journey. During the very first night of his trek, the twelve-year-old trips over a tree root and breaks his ankle. Agonizingly, he drags himself to a nearby barn where he passes out, only to be awoken by the owner, a peg-legged, middle-aged woman named Vola, who reacts with initial hostility to his trespassing. Vola lost her leg while serving as a medic in another, more distant war, and has since been living alone on her backwoods farm nursing her leg and her deeper emotional wounds. Luckily for Peter, she is able to use her medical training to get him, slowly, back on his feet, and back on the trail toward Pax.

Pax is not only an interesting read because of the characters’ personal journeys, but also because of the novel’s discussion of war and human nature. Until their separation and subsequent attempts at reunion, Peter and Pax are relatively ignorant of the problems facing their shared world. Peter is consumed by his own personal angst, while Pax notices a conflict in humans, but focuses most of his energy on protecting Peter from it. It is the other foxes who first make Pax aware of what they call the human’s false acting nature and “war sickness.” Simply put, the foxes, who have all encountered humans to some extent, have picked up on a tendency of people to practice self-serving dishonesty. This leads, at least in part, to the belligerency that also plagues them. Upon reflection, Pax realizes that he experienced these things through Peter’s father, particularly when he feigned regret while deserting Pax. The young fox insists, though, that his boy is different and is more pure than much of his race, a loyalty that is eventually vindicated at the end of the book. When Pax’s belief in Peter is proven true, we see the way that loyal friendship has helped Peter to preserve his innocence and purity against falseness and war sickness.

Despite the insistence of the foxes on humanity’s war sickness, Pennypacker is not fixated on writing an anti-war children’s book. This point is made clear through the least likely of characters, Vola, whose post-traumatic stress and physical disability are a direct result of her participation in combat. Peter, in fact, assumes at one point that his caretaker is anti-war and she replies to the contrary. Vola states that war is not always wrong, but that nations and soldiers must identify the true motivations behind their conflicts and choose very carefully what to fight for.

Vola’s true purpose in the story is to teach Peter, and to help him learn for himself, certain truths. One of the biggest of these truths is that people need community. It is clear that Vola was devastatingly injured and that she needed time to recover from her trauma. But Peter realizes very quickly that, by isolating herself, she is perpetuating her feelings of guilt and that she needs to connect with others in order to ever fully heal. He helps her to do this, while at the same time, helping himself to get past his own trauma and fears.

When Vola left society to live on the farm, she did so as a retreat in order to reconnect with what was true about herself and about the world. Some of what she has uncovered she shares with Peter, and while she states that truth is a personal matter and that people need to find their own (a problematic message in itself), her journey of self-reflection does yield some important lessons that she is able to pass on to her young tenant. Though the self-discovery message is a bit new age-y and ultimately mistaken, the realization that there are constants in this world is valuable.

Pax is a book that your middle schooler will really enjoy. The structure of the book and the way that it bounces back and forth between Peter’s and Pax’s respective subplots gives the story a great rhythm; Peter’s often melancholic reflectiveness is balanced by Pax’s vitality and newfound animal nature. Finally, this is not your typical book of child and pet friendship cut short by the tragic death of the animal companion; that’s a genre that many of my students dread, and that, I agree, may be a bit played out. Without spoiling the conclusion to Pax, I will say, the ending is not what I was expecting and fearing, and, for that, I am a grateful reader.

Kyle has been teaching humanities at The Heights since 2015, working with 7th graders in the subjects of English, Latin, and history. Kyle advises the Ski Club and the Middle School Outdoorsman’s Club, and is also in charge of organizing the school’s famous Clan Games. A Division-1 soccer player, Kyle is the goalkeeper coach for The Heights soccer program and trains keepers in grades 7-12. His other interests include Irish history and music – both of which he pursued during graduate studies in Northern Ireland – and working in his family’s vegetable garden. A native of the Finger Lakes region of New York State, Kyle now lives in Hyattsville, Maryland, with his wife Julie and their children Thomas and Cora.
Learn more about Kyle Blackmer →