The Trilogy That Gave Us the Expanded Universe 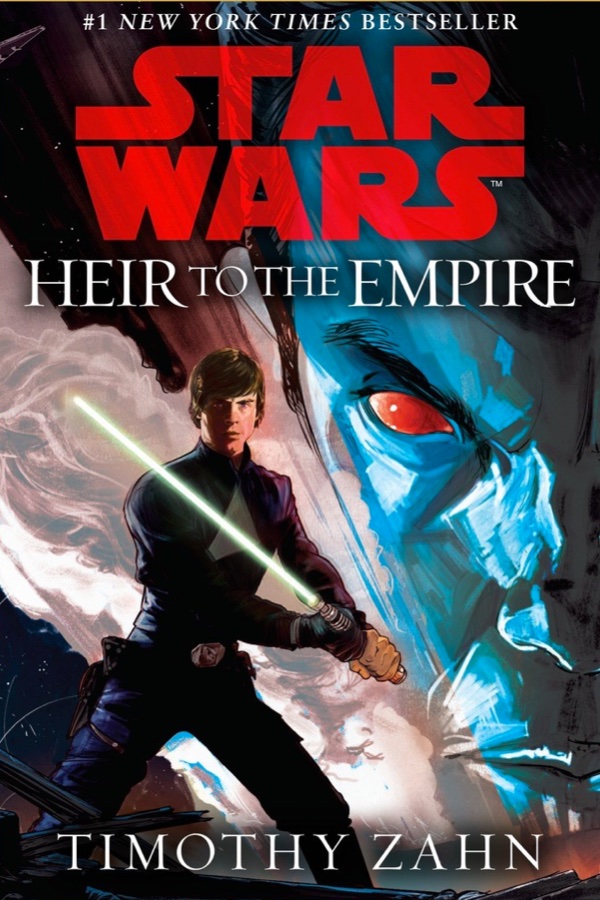 A long time ago, before the threat of the First Order, and before the significantly graver threat of George Lucas’s lamentable prequels, there was the Expanded Universe, or EU. Consisting of hundreds of officially licensed novels and comic books that spanned the thousands of years before and the decades after the events of the original trilogy (OT), the EU was, for years, the home of Star Wars fandom. Through this elaborate tapestry of interlocking plot lines, top science fiction writers grew the original space myth into a fascinating, and mostly well-thought-out legendarium. Filled with a reverence for the OT, the EU believably continued the story, not only developing its existing elements, but also deepening the Star Wars universe with new characters and new threats. Standing out among these, and establishing the direction of the entire post-film history was Timothy Zahn’s best-selling trilogy, here reviewed.

The three books of The Thrawn Trilogy: Heir to the Empire, Dark Force Rising, and The Last Command, take place five years after the events depicted in Return of the Jedi. As a nascent New Republic struggles to rebuild what was broken under imperial rule, and to recapture and clean up the few remaining pockets of Imperial resistance in the galaxy, Han, Leia, and Luke have struggles of their own. For Han and Leia, now happily married, the work of building up the New Republic means frequent separation, a separation made more stressful by Leia’s pregnancy with force-sensitive twins. Luke, on the other hand, is struggling to find his place in the new order, an order that is quickly taking on all the typically unheroic and muddy qualities of democratic bickering and political maneuvering, and which will need the wisdom of the Jedi in order to really thrive. But does Luke know the Force well enough to re-found the ancient order? Against this backdrop, a new and improbable enemy emerges.

While Vader relied on the Force, and the threat of violent punishment in the case of failure, Grand Admiral Thrawn, the blue-skinned, red-eyed military genius whose existence the Emperor kept secret, is a horse of a different color. Thrawn defeats his enemies by studying their psychology, and this, in turn, by studying their species’ art. His is a grand, methodical strategy for reversing the Rebellion’s victory at Endor, and he executes it step-by-step over the course of three books, pulling victory after Imperial victory from the ashes of defeat. The heroes of the original story must once again take great risks to reverse the Empire’s tide of victory, all while trying to hold the New Republic together against the forces of political turmoil. In this they will be joined by old friends, and a few new ones.

Timothy Zahn did an excellent job of expanding the Star Wars universe in ways that were actually faithful to the spirit and aesthetic of the OT. Because he approached the story and characters with reverence, instead of trying to be novel, he was able to grow the world Lucas created, even while leaving the original intact. Thus, there are no plot or aesthetic discontinuities with the OT (unlike the prequels, which contradict the OT in numerous ways.) The books also develop certain elements of the back story referenced in the OT, and they do so in ways far more believable than what George Lucas eventually put on screen (years after the publication of these books) in the prequels. To name two examples: Clones, obliquely referred to in the OT, but morally normalized by the prequels, are here regarded as a bad and creepy thing. Cloning is the sort of thing that evil, not good, would do. Likewise, the EU knows nothing of the arbitrary rule of Jedi celibacy invented by George Lucas for the prequels, a rule which is self-contradictory at best (because force sensitivity is passed through bloodlines), and at worst requires by implication that Jedi pass on their bloodlines outside the bonds of marriage. Indeed, Luke Skywalker does eventually marry within the EU!

Because it was well done and officially licensed by Lucasfilm, for a long time the EU also had official status in the eyes of fans. However, with Disney’s acquisition of Lucasfilm, and with the new Star Wars films, an entirely new Expanded Universe is being constructed, one which differs in almost every detail from that which fans considered canon for years. Disney, to its credit, will respect the fans by continuing to publish these books (now re-branded as Legends) even while it develops its own Expanded Universe. Moreover, Disney has already made use of Grand Admiral Thrawn in one of its new animated Star Wars shows, and has suggested it may borrow selectively from elements of “Legends” as it constructs its own Expanded Universe. There is hope that beloved EU characters, like Mara Jade, may eventually appear, in some form, in the new continuity.

Although the writing is nothing extraordinary, The Thrawn Trilogy is wonderful in many respects, and opens Star Wars fans up to a whole world of new stories. Even younger fans raised on the disappointing prequels, or on the new Disney films (which are far better than the prequels, but seemingly dark in tone) will still enjoy this sequel, and the many stories that follow it, as an alternative version of the same beloved universe. The books are recommended for fans of all ages.

Joseph is a fifth grade homeroom teacher at The Heights School. He graduated from the Heights in 2001, and attended Franciscan University of Steubenville. He and his lovely wife Elizabeth have three sons, Julian Reuel, Ignatius James, and Benedict Lawrence. Joseph has been the Heights' head varsity wrestling coach since 2013. His original stories and reflections can be found at joeybreslinwrites.com.
Learn more about Joe Breslin →