Computers and Technology in Education at The Heights School

A Conference for Men Exploring Professions as Educators

It is not uncommon today to read about the positive aspects of incorporating the use of computers and the Internet in education.  Several examples come to mind: the push to bring classrooms online, software designed to teach, and the general trend towards providing each student with a computer with Internet access.  Although it is probably apocryphal, the most moving anecdote I heard involves an Internet-ready computer someone set up in a slum in India that illiterate children used to not only learn how to read but to actually acquire a rudimentary education.  Laced with undertones of a messianic vision of the Internet bringing enlightenment and equality to the next generation, this story captures the spirit of optimism some hold for technology in education.

Anyone who seriously evaluates the situation of education in the United States today, however, must come to the conclusion that the solution to the centuries-old challenge of educating the next generation is not solved by increased Internet access.  Today children have greater access to computers and the Internet but do not seem to be better educated.  In fact, despite the wealth of information at their fingertips, today’s students are in many respects far more ignorant than those of previous generations.  Just compare the literature that high school students today read with that common a century ago, or the quality of writing that is typical between the different generations, and it becomes clear that if command of the English language is any indicator, we are far inferior to past generations.

The rise of computers and the media, in general, do seem to have something to do with the decline in the level of education in our culture, although it would not be fair to blame computers with the problem, a problem that predates the advent of the personal computer by at least a few decades.  The crux of the issue is the fact that an authentic liberal arts education involves development in intellectual virtues, the building up of one’s powers of concentration, the forming of one’s outlook on reality so as to be able to calmly ponder great ideas at the pace of a page-turning, a pace much more human than the modern pace of images on a screen.  In this context, then, we can affirm that though computers are useful professional tools, their role in authentic education is limited.

At The Heights, we seek to help students learn to use computers as professional tools while avoiding the challenges that computers can pose for authentic education and human formation.  Computers with Internet access are available for students in the library and in the computer lab.  The computer lab and the computer terminals in the library are available for students to do research and school work.  Personal uses of school computers are not allowed.  To ensure that computers are used in a manner consistent with this vision, all computers are in public areas.  The screens are set up so that anyone walking by can easily see them.  Any type of computer use that could be understood by a Heights faculty member to be more entertaining than academic is quickly stopped.  Among other faculty members, our full-time librarian closely monitors student use of the computers.  Not surprisingly, websites such as Facebook.com where the purpose is obviously entertainment are prohibited.  Faculty governance of computer use, however, sets a higher tone than this: Google Maps was deemed an inappropriate site as students tend, for the most part, to indulge their curiosity by looking at aerial views of familiar places.  And while the faculty does, in general, do an excellent job of ensuring that computers are used as professional tools, all Heights computers have an advanced filtering system.

Are Computers a Good Tool for Teaching?

The national trend today is to increasingly rely on computers as teaching tools in the classroom.  In some instances, students come into class and sit in front of their screen, and go through a tutorial on the computer in lieu of interacting directly with the teacher.  A recent Heights graduate complained to me that the college he attends teaches introductory calculus online.  He said that he would much rather interact with a teacher to learn the material.  There is substantial resistance to this level of computer use in education, and not just at The Heights or similar schools.  Most educators realize that the role of the computer should be at least somewhat limited.  Responsible use of computers in education can involve the use of smart boards and other similar technology that allows teachers to take advantage of the resources available online to enhance lessons and model appropriate professional uses of computers to their students.  This technology is currently used by some Heights teachers in such responsible ways.

One somewhat distinctive, although certainly not unique, decision that administrators and teachers at The Heights School have made is the decision to resist the trend of placing computers in front of students in classrooms.  While a teacher modeling appropriate professional uses for a computer through smart board technology can support the progress of a unified class, a radical change is introduced when students focus on their own screens and keyboards.  Assuming that appropriate safeguards are in place and the teacher has enough personality and control to keep the students on task with their own personal computers – big assumptions – the loss of the human element in education is still quite troubling.  Teaching is a difficult and noble profession; it is an art to guide a class and the individuals in the class to connect with the material.  Students learn the human value of the texts and ideas they engage from the experience of engaging them in the context of a class, full of discussion, under the leadership of a good and wise teacher.  The closest computers have come to being a presence in a traditional classroom at The Heights is their occasional use for word processing in upper school English classes.

What Happens in the Computer Lab 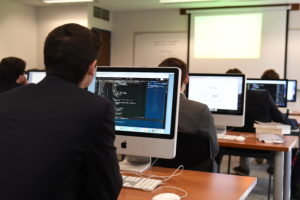 The Heights does offer two upper-level, elective classes in computers that in many ways resemble the traditional disciplines of mathematics and foreign languages and are of solid value for a liberal arts education.  In these classes, Programming: Python and Programming: Java, students engage in a rigorous and detail-oriented study of computer programming and some other topics like how to build a computer or design a Website.  The material is often analytical and mathematical in nature and requires meticulous attention to detail, as a period out of place can change the entire meaning of a line of code. Any students who wish to continue their studies of Computer Programming craft an independent study with the help of Mr. Beatty, our IT director.

While these classes appeal to a portion of the student body, formation in the responsible use of computers as professional tools is provided to all students.  The carefully thought out integration of computers into education at The Heights in a manner consistent with the philosophy of the school sets a tone that boys pick up over time.  Students learn about research in seminars conducted in the library by grade or class and often delivered by the head librarian.  And most importantly,we aim to support  the mission of the school in all we do: to assist parents in forming their children to be lifelong liberally educated learners, comfortable with the pace of a page-turning, or the human value of shared dialogue.

Many Heights students, while certainly not Luddites, come to recognize the limited educational value of a computer for what it is.  They make use of computers like most others in our culture:  doing some research on them (although it is common for Heights faculty members to demand that books or journal research form at least part of the research for papers), communicating by email, writing papers on word processors, and in some cases—although it is discouraged by the faculty and many parents—for video games and the like.  They will never, however, be allowed by The Heights faculty to overvalue the educative purpose of knowing how to navigate the Internet, as if simply knowing how to access information is equivalent to a liberal arts education.  And in the end, for the most part, they come to the mature realization that computers are useful professional tools, not more.

A native of Rochester, NY, Michael Moynihan earned B.A. degrees in history and science pre-professional studies with a concentration in the Honors Program from the University of Notre Dame. He graduated Summa Cum Laude and was a member of Phi Beta Kappa. After teaching for one year and earning a master’s degree in theology from The Catholic University of America, he joined the faculty of The Heights School in 1995. He has taught chemistry, Advanced Placement chemistry, eighth grade science, ethics, math and religion, has coached The Heights’ cross-country team and founded The Heights Mountaineers program. Michael was named Head of the Upper School in 2002. He and his wife, Angela, have eleven children, with four sons here at the School.
Learn more about Michael Moynihan →