One of the great fruits of studying classics is learning to read carefully. Translating ancient languages trains you to facilitate communication: you have to create a faithful representation of what person A said so that person B can understand it. You have to be able in every instance to point to someone’s exact words in order to claim to know what he or she is thinking. This is city-building on the personal level, and that’s one shade of the meaning of the word “communication”.

This is why we spend so much time getting it exactly right, and why my Latin or Greek students are always ready to say, to a translation that gets the gist, but is not as accurate as it could be: “True, but what does the Latin (or Greek) say?” Here comes a great example of a “true, but what does the Greek say?” moment:

If you hear the Gospel in the Lectionary on Tuesday (3/22/22), you might be missing out on some great fun.

Here’s what you will hear:

Peter approached Jesus and asked him, “Lord, if my brother sins against me, how often must I forgive him? As many as seven times?”

Jesus answered, “I say to you, not seven times but seventy-seven times.

That is why the Kingdom of heaven may be likened to a king who decided to settle accounts with his servants.

When he began the accounting, a debtor was brought before him who owed him a huge amount.

Since he had no way of paying it back, his master ordered him to be sold, along with his wife, his children, and all his property, in payment of the debt.

At that, the servant fell down, did him homage, and said,

‘Be patient with me, and I will pay you back in full.’

Moved with compassion the master of that servant let him go and forgave him the loan.

This is the passage from Matthew 18 in which Jesus tells Peter that we have to forgive our brother as our heavenly Father has forgiven us.

But if you’re reading the Gospel in Greek or Latin or a translation, then you know that the servant did not owe “a huge amount,” but rather “ten thousand talents.”

That’s where the great fun comes in.

Some years ago, with my parish men’s group I read 1 Maccabees. Then for the first time I finally felt that I had found a useful comparand for “ten thousand talents”: the ransom note sent by Antiochus to the Jews after he had captured Jonathan. It’s in Chapter 13.

Antiochus demanded a hundred talents to ransom Jonathan (verses 15–16). Jonathan’s brother Simon knew that it was treacherous, and that he wasn’t going to get Jonathan back anyway, but he was stuck: he couldn’t risk the popular outrage that would follow Jonathan’s death if he did not do everything in his power to get him back (verses 17–19).

The foreshadowing of the carnal Israel versus the spiritual Israel is obvious: you can’t purchase salvation by any means you possess on your own. More importantly, however, the amount of money mentioned here—a hundred talents—unlocks the significance of the larger amount—ten thousand—in today’s Gospel.

King of the Jews?

Jonathan was, legally speaking, the king of the Jews, and that’s how Antiochus thought of him. His title among the Jews was “high priest” of course, but in previous chapters we had read that it was Jonathan who, as high priest, interfaced with and was acknowledged by foreign governments. For example, in the previous chapter (12), he had sent his emissary to the Roman government and had his status and his nation’s status confirmed by the senate. The Roman senate received his emissary and granted them the status of “friends of the Roman people” (verses 3–4), a well-established form of relationship that Rome often entered into with client kings of the Orient (that part of the Roman Empire that stretched roughly from what is now Turkey to Mesopotamia).

The term amicus or Friend (to the Romans) appears on many inscriptions found on monuments to client kings. For example, a monument to one king Herod was found on the Athenian Acropolis, and is cited in Peter Richardson’s (1996) book, Herod: King of the Jews and Friend of the Romans. He was acknowledged as a benefactor who had donated money to beautify the religious center of Athens. Through him—his person—his nation was acknowledged. 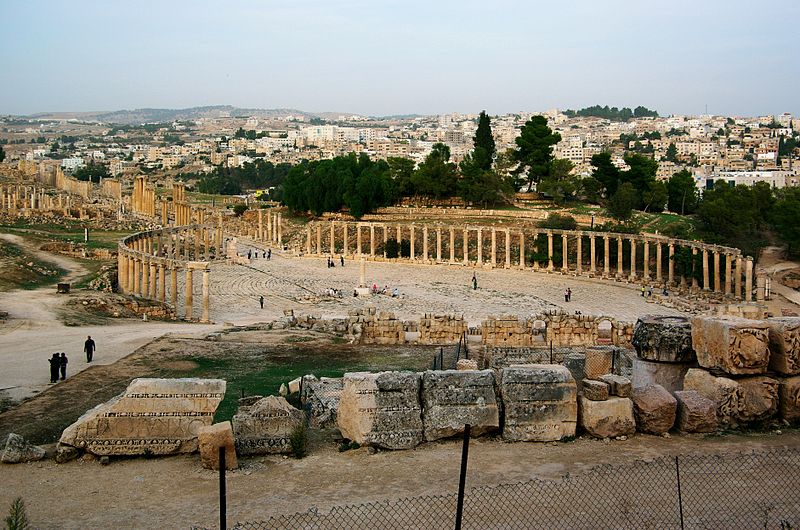 Forum of Gerasa (Jerash in present-day Jordan), with columns marking a covered walkway (stoa) for vendor stalls, and a semicircular space for public speaking.

To be clear: I am not alleging that being an amicus of the Roman people makes you a king, but I am saying that the Romans do not enter into the relationship of amicitia or Friendship with you unless you are an entire nation or are speaking as or on behalf of the highest authority of that nation.

Readers of the Gospels will recall the dangerous threat made by the enemies of Christ on trial, who said to Pilate that if he released Christ, then he was “no friend of Caesar” (John 19.12). Pilate was not King of Judaea, but he was the highest authority in the nation: he could mint coins and condemn Jesus to death. For him to be “no friend of Caesar” was tantamount to open rebellion. This was after all the accusation they made against Jesus: that he was saying that he was “Christ, a King” or, to translate the Greek more literally: “an Annointed King” (Luke 23.2).

So how much is a talent worth, anyway? And how much did this fellow in Tuesday’s Gospel owe? The text says “ten thousand talents”—but what would that be in today’s money?

Often commentators on ancient texts will try to reduce the value of a “talent” to an equivalent dollar amount (or pounds sterling). Older dictionaries like Lewis and Short do this: once upon a time, when Lewis and Short was written, an Attic (i.e., Athenian) talent was worth “£243 15s. sterling ($1182.19 in American gold)”. Your guess is as good as mine what that equals today or what it will be next week. The short answer to the question about today’s money is, in my opinion, who cares?

[Not to be too flippant: my colleague Mark Grannis now tells me that the above amount of British currency today, based on gold trading at $20.67 per Troy ounce when Lewis and Short were writing, and at about $2,047.80 these days, actually equals something like $1 billion]. 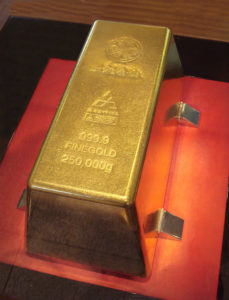 The world’s largest gold bar at the Toi Gold Museum. PHGCOM – Own work by uploader, Toi Mine.

We have to give up on equating it to currency, because the value of currency is constantly fluctuating, and because this fluctuation is happening because currency has no inherent value. The word itself recalls the movement of water in a stream, and comes from the Latin word that means “run”. Clever name, isn’t it?

One thing we can be sure of, however, is that when you translate money, the sender and the receiver are going to want equivalence. They’re not going to settle for an amount of money that merely expresses how a third party feels when he or she reads the original amount. We would be trapped in a subjective system with no way of communicating with others.

In order to avoid such an irrational prison, we need objective reference points. We have to equate the ancient talent to things that we value spontaneously and with general consensus. For example, in the 5th century BC, it cost the Athenians about 1 talent to repair a warship, and about 2 talents to build a new one (Robbins, F.E., Classical Philology, Vol. 13. No. 4 (Oct., 1918), pp. 365–366). If anything is an objective reference point, it’s a nice, wooden ship floating in the Peiraeus. We can all agree that saying that a man owed enough money to build five thousand ships is quite a bit more impressive than saying he owed approximately $167 million ($1,182.19 times 10,000, adjusted for a century of inflation), or even $1 billion. 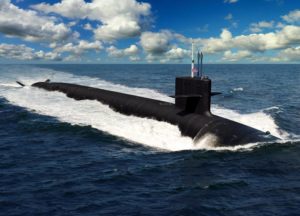 A concrete measure – a warship.

But then…even that’s still something the moneyed kings of this earth can buy. The US Navy recently agreed to pay $9.4 billion for a couple of submarines, after all.

So where is our objective reference point? As usual: elsewhere in the Scriptures.

The King of Kings!

Have you figured it out yet? Antiochus wanted 100 talents as ransom for Jonathan, whom he and the international community considered to be the king of the Jews.

They don’t pay me to teach math, but even I can see that that’s 100 talents times 100 talents, or a king’s ransom of kings’ ransoms.

Who can pay a king’s ransom of kings’ ransoms?

Only the King of Kings, of course. The Augsburg Hoard, discovered just a few months ago. At 5,600 coins, the hoard represents almost one talent, and could have been earned by a Roman soldier in about 11–15 years. It is the largest hoard ever discovered in Germany.

So can we agree on a definition of “translation”?

So perhaps we can call translation: the act of ascertaining an idea from one person’s words and expressing the same idea in another person’s words. My job as a translator—my duty—must be to produce such a translation that, if the speaker were to learn the language of the audience, he or she might be able to say, “Yes, that is what I meant. It is what I would have said if I had known your language back in those days.”

People are judged all the time based on their words or actions. It is only fair to represent them as faithfully as possible.

Dr. Yaceczko has taught regular and online courses to all ages at the primary, secondary, and postsecondary levels, as well as summer programs for inner city boys in Chicago and Washington, D.C. Lionel’s research is focused on Late Antiquity (ca AD 180-800), with a doctoral dissertation on education in the later Roman Empire. His articles have been published in Studies in Late Antiquity, The Medieval Review, Crisis Magazine, HeightsForum.org, and Cavalcade. He has also worked in academic publishing. Lionel lives in Laurel with his wife Janet (another Latinist) and children Stanislaus, Sarah, Thom, Lio and Diego.
Learn more about Lionel Yaceczko →