Thoreau’s Cabin-Life: Why It’s Not Anti-Social to Savor Solitude

I realize that the not-too-distant memory of pandemic shutdowns doesn’t make being alone a very comforting prospect. Nevertheless, we need solitude, at least a little, each day. We also need a guide if we are not only to endure but to thrive in the challenges presented to us in solitude. In this way, solitude can in due time reveal to us another way to view ourselves and the world that is like a bay window looking out on a seacoast with horizons extending to eternity. The wonder will be all around us. The strong interior silence cultivated at such moments, moreover, will help us ward off the voices trying to get inside our personal space.

These voices usually say that you’re not good enough or don’t have friends enough or money enough or whatever enough to satisfy the superficial world that talks itself mad. They need to be silenced. Solitude is a major part of doing that.

Henry David Thoreau (1817-1862) was a naturalist, essayist, journal-writer, and author of Walden, an account of his time living alone for almost two years in a cabin he built for himself a mile or so from Concord, Massachusetts, where he was born. Thoreau has inspired people of vast social consequence, such as Gandhi, Martin Luther King, Jr., and John Muir, a founder of the environmentalist movement.

Ralph Waldo Emerson, in a memorial essay on Thoreau published in The Atlantic in 1862, though complimentary about his friend and his literary work, cites a comment by an acquaintance who said hugging Henry David Thoreau was like putting your arm around an elm tree. But an elm tree can be great for a lot of things besides emotional affirmations. Shade, for one. A place of quiet, for another. 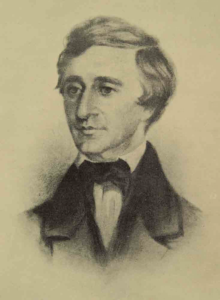 There are two reasons why Schulz gets Thoreau wrong. The first is literary. She’s deaf to the oral traditions of folklore that shaped Thoreau’s tone of voice. She fails to hear the raconteur, the Yankee wit, in Thoreau’s prose that contrasts with the semi-savage frontiersman of the plains and the mountains.

These voices of the American east and west respectively, according to Ralph C. La Rosa in an article he wrote for The Sewanee Review as far back as 1975, gradually blend as they wend their way to the final chapter of Walden that is a reconciling hymn to the rebirth of spring. La Rosa begins his case by referencing Thoreau’s early readers and his neighbors: “They found him an engaging fireside story teller, natural mimic, spontaneous singer and dancer, even ice-skater who abandoned gracefulness for bacchic leaps,” a “witty, sarcastic, and amusing” lecturer in the local lyceum who kept his audiences “in almost constant mirth,” and a professional writer whose “playful and sparkling thought appears on almost every page” of Walden.

The second reason why I suspect Schulz is so contemptuous of Thoreau is that she perceives, rightly, that he’s an ardent defender of solitude, but she mischaracterizes this as a disdain for friendship. In a certain sense, solitude or what is more accurately called loneliness is a terrible thing which brings with it all kinds of ill health, not limited to increased risk of heart disease, dementia, strokes, and a host of ill-adapted cognitive habits such as negative self-image, hopelessness, and depression. This isn’t the kind of thing Thoreau is talking about at all.

What Thoreau is talking about in Walden is a freely chosen cultivation of solitude in order to perceive the world around us.

Emerson loaned Thoreau the use of several acres on Walden Pond for his sojourn outside Concord’s immediate environs. In April 1845, Thoreau purchased the boards making up a shanty owned by an Irish railway worker, James Collins. On July 4, he began sleeping in the framed-up cabin, after having hewn trees, cleared the ground, dug the cellar, built the flooring, raised the walls (with some local help), and put on a roof before the onset of winter.

The title of Walden’s second chapter is worth pondering: “Where I lived, and What I lived for”. This is a philosophy of life in terms of place and purpose, with the former serving the latter. The relative solitude of Walden Pond allowed Thoreau just enough solitude and just enough socializing to gain the freedom of critical distance. Hence his determined stances against slavery, taxes that supported slavery, and Concord’s materialistic way of life.

“I went to the woods because I wished to live deliberately, to front only the essential facts of life, and see if I could not learn what it had to teach, and not, when I came to die, discover that I had not lived”—(Walden, Chapter Two).

This isn’t a credo of contempt for life but a determined effort not to miss the meaning of living in the world as a human being fully awake. It’s a prose style as right and fine as an expertly trimmed plank of Eastern White Pine. Despite Thoreau’s habitual disregard for tradition, the word “deliberately” sets the passage in the philosophical tradition of the West of examining life in order to choose wisely among an increasingly varied mirage of goods.

In the relative seclusion of Walden Pond, Thoreau found solitude enriching his moments until they felt like hours, rich in revery. Thoreau doesn’t guide us into solitude so we can give up on life; he leads us into a quiet where the truth awaits us. “This alone wears well,” he says, because it stands aloof from our chatter, our fears, our riots of passion that puff up the trivial and ignore the wonders at our feet. Wonders that when shared make for even greater joy than when discovered alone, amid the falling leaves.

Mike Ortiz teaches twelfth grade AP English. He is a recipient of three National Endowment for the Humanities fellowships, including participation in the Independent Summer Scholar Program. He holds a B.A. in English from Saint Anselm College and an M.A. in English from Georgetown University. He began teaching at the School in 1985. His children’s novel Swan Town: The Secret Journal of Susanna Shakespeare (HarperCollins) was published in 2006. His latest book, Like the First Morning: The Morning Offering as a Daily Renewal (Ave Maria Press) was released in April 2015. He and his wife, Kathleen, have four children. Son David is a graduate in the Class of 2011; Daniel is a graduate in the Class of 2014.
Learn more about Michael Ortiz →