Classroom Management From Day One

Five Things I Wish I Had Known

In 2006 I experienced some momentous first experiences. My first wedding anniversary, the birth of my first child, and my first time working a full-time position teaching middle school and high school.

At the beginning of that school year, my headmaster told me that he thought it took a person two years to find out whether he was called to this profession or not called to this profession. He also mentioned a study covered by a New York Times article that found the average tenure of a public middle school teacher was two years. I have not been able to find that article today, but one finds the same sort of thing in new studies and new articles anyway, like this one here describing the profession in The Guardian (UK).

Now I can not think of a harder job than teaching middle school boys, unless it is high school (English) composition, but I think those of us who have been through it commonly feel optimistic going into the second year. One has all the failures and successes and disappointments and revelations of the first year’s experience to build on, and still has most of the naïveté that makes it easy to dream and experiment. The rookie teacher with visions of eager students waiting like little birds for premasticated knowledge—the fascination of which is sacrosanct to all in the nest!—to be dropped into silent, patient mouths, soon finds that his plans for classroom management must change. Indeed, many of us find that we never actually considered it necessary to think about classroom management, until the quaint, mild, avian dream has been transformed into a Stymphalian nightmare.

I still think, more than a decade later, that the most improvement one makes teaching a course is between year one and year two. Every subject or course may be different, but…are there some things that we all ought to do during that crucial planning period in the summer to see a fruitful harvest in the fall?

Listening to Alvaro de Vicente’s Heightscast a couple of weeks ago about hiring made me want to try to answer that question better, and so I jotted down a few points about classroom management. I offer them here as an invitation to eavesdrop on 2019 me telling 2006 me what I wish I had known then, but could really only have learned through suffering—the price of wisdom.

One of the great blessings administrators at colleges and secondary schools can give their faculties is a mandate to produce a syllabus before the course begins. Whether I am teaching one student (as I did in a course this summer) or thirty-one students, I always write a syllabus with a calendar accounting for every single day of the semester. It does not have to be very detailed—sometimes a whole semester’s calendar will have little else on the daily lines than what chapter of the textbook we will cover that day—but it does have to have all the major objectives and their deadlines. When you sketch a big picture, you want to 1.) include all the essential characteristics and 2.) keep them in relation to one another. For example, when you draw a face, make sure the height of the eyes is roughly between the tops and bottoms of the ears. This forces us to list our objectives for the course.

We have to be able to distinguish between objectives for the course and goals for student learning. A goal for student learning might be that the student should be able to recite his times tables from 1 to 12 or to cite the minimum text necessary to support an interpretive claim about a character in a work of literature. Students have widely varying levels of success on these fronts, and that is part of what their different grades tell them and others. An objective, on the other hand, is a simply and objectively verifiable agendum (a-thing-that-ought-to-be-done) for the class as a group. Do 100 problem sets in the math textbook. Take a quiz on each chapter of To Kill a Mockingbird. Objectives should be the first-placed and most-immovable pegs in the syllabus calendar. My courses will have about seven in a semester (of about sixty class meetings). 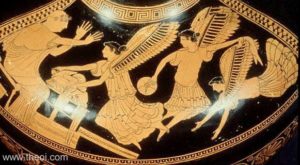 Walking into a classroom without having scripted your session is an act of hubris, a preference of time over vision that will be punished like the sin of Phineus [1]. It does not have to be a 30-minute lecture to be read verbatim from a lectern: it could even be two or three bullet points jotted down in a notebook. Like the objectives over the whole semester, know what you are going to be doing at the beginning, by the end, and in the middle. At the end of the day, you will be able to say whether you have succeeded or failed in at least a couple of simple objectives. Of course, there are times when a well-crafted lecture is a great thing.

Have you ever tried to get a teenage boy to work? It is not easy. Work requires the virtues of fortitude—doing what you do not want to do, because it is the right thing to do—and temperance—not doing what you want to do, because it is right not to do it. All virtues —remember that “virtue” is just another word for “good habit”—require practice. I like to teach character study in literature classes by likening it to geometry. An action is a point. By itself it does not permit you to predict behavior. Two (or more) points make a line, and that is a habit. If you see me drink coffee on Monday at 10:30, you can not predict what I will do on Friday. But if you see me do it on Tuesday and Wednesday and Thursday at 10:30, then you know where to find me tomorrow morning at 10:30. When you have a few lines, you can see a plane. Now that is something that can have color and texture: that is a character. Now you can start to say whether someone is honest (or dishonest), temperate (or dissipated). Add to my coffee habit some habits of snacking and chatting, or of abstaining from food and going back to my office to grade papers, and you start to see a better or worse teacher. What makes a better or worse student? Obedience first. In fact, the Latin and Greek languages each have a single word that means both education and correction: disciplina and παιδεία (paideía). But the authority to correct depends as much on trust as it does on technical mastery: every command, every demand for obedience, is a claim we make on a student’s trust. We have to earn that little by little. So we have to create an environment where our students’ classroom experience is a predictable environment of trust and respect. We can do this by means of routine, and by appealing to the student’s rational freedom with many small, reasonable requests outweighing the big ones that cost more effort to obey.

Everything we have said so far depends on our ability to change the plan. Even as planning the semester, the month, the week, and the day are necessary and foundational, forcing a class to meet objectives that we designed before we even meet our students is objectification. We have to see the person who is in front of us, and remember that evil is boring, but good is exciting, and has countless unique perfections. Low expectations at the beginning of a class are best…but only if we keep them secret. As soon as the student shows you he is capable of more than what you had privately been willing to settle for, immediately raise the floor, and do not let him get away with anything less!

You will need to have boundless patience. You will need to remember that your students have not yet fallen in love with your subject; they do not lose track of time, captives of a singular love, bent over the object of fascination that you are trying to present to them. Teenage boys are still as much children as men: they do not grow up as fast as girls do, and so often they are incapable of sensing the emotional effect of their words and actions on the persons around them. So plan and be patient. Never yield the ideal, but be content with little.

[1] Phineas, as reported by Apollonius of Rhodes, was punished by watching a feast guarded by harpies and being unable to consume any of the food without bringing down their wrath upon him. He was punished because, as a mere mortal, he was telling other men their futures. Argonautica 2.178–86

Dr. Yaceczko has taught regular and online courses to all ages at the primary, secondary, and postsecondary levels, as well as summer programs for inner city boys in Chicago and Washington, D.C. Lionel’s research is focused on Late Antiquity (ca AD 180-800), with a doctoral dissertation on education in the later Roman Empire. His articles have been published in Studies in Late Antiquity, The Medieval Review, Crisis Magazine, HeightsForum.org, and Cavalcade. He has also worked in academic publishing. Lionel lives in Laurel with his wife Janet (another Latinist) and children Stanislaus, Sarah, Thom, Lio and Diego.
Learn more about Lionel Yaceczko →