Board Games: An Alternative to Screen Addiction

Any person who desires to explore the continually unfolding game board on which the family relationships play will agree that evenings spent locked onto our various glowy devices can only burn lives. This is why wise people annoy us by telling us to turn off the glowy things. Alvaro de Vicente, our headmaster, has a great podcast on training the boys for freedom with, rather than slavery to, their phones. But simply removing one potentially detrimental form of entertainment does not solve the problem unless we replace it with something nourishing for the family, couple, or group.

Enter board games, carried in the arms of the nerds who love them. Tom Steenson has already proven to us that chess is better than video games. It’s not that I and all my colleagues are in cahoots and have decided behind closed-doors to rail against screens. Rather, experience has shown us the good and bad use of games in developing our selves and relationships with those around us, not cutting ourselves off from the world and interacting only through mediated pixels. This becomes particularly important as the chill of autumn gives way to winter and we find ourselves tempted to replace the green time we so easily enjoyed in the summer and early fall with the screen time that becomes a bigger temptation as night falls earlier and the blue glow tempts us to be nocturnal.

Since “board games” has become an umbrella rather than a literal term, I’m including scenario- and character-driven card games in this conversation. And for the especially adventurous, or for people who don’t want to read my bombastic prognostications, I’ve put a list of recommendations for your next game night waaaaay down at the bottom of this article. I’ll race you there.

In the context of a group (large or small) trying to build memories and relationships, the primary objective of board games is fun. Having fun together is a bonding and positive experience. Game night can quickly become an anticipated weekly or monthly tradition for friends and family. To those who—sometimes to justify addiction—insist that MMORPGs or the latest unFortuNite (see what I did there?) craze also promote social interaction, I can only say that no matter how Hi the Def, physical human persons are more alive than any pixelated frenzy of lights and colors that draw your eyes away from the windows of another’s soul.

I had a helpful conversation with my students one day about this, in the wake of which I realized that part of what gets cut out of the “social component” of these games is body language. Body language is a fundamental human form of communication. Given and received in an unconscious way, it forms and informs our perceptions and connections with each other. It turns out that we are both bodies and souls. Who’da thunk? Probably best to engage both.

In an attempt to persuade any reader who is still kind enough to tolerate my grand pronouncements, I’ll provide a couple of suggestions that emphasize three characteristics of a fun game: a luck/strategy balance, simplicity, and teamwork.

The Luck/Strategy Balance: Staving off Boredom in Board Games 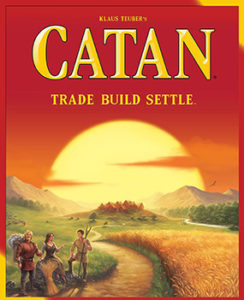 Some games have rulebooks which at first appear to take up most of the space in the game box. This can be disheartening. Games with a high degree of complexity can be a turnoff for a casual player. On the other hand, games based only on luck are uninteresting to players who like to take on a challenge. Finding a game with a good balance of luck and strategy is finding a game that brings all kinds of players together.

The pioneer of these games is called Settlers of Catan. It has earned the nickname of the gateway drug into board games. It is certainly the Gateway Arch which takes game night past the endless rounds of Monotony or the intricacies of deuce-to-seven-triple-badugi-midnight-no-peek poker. Players try to build little roads and towns on a friendly six-sided board, dotted with mountains and sheep and amber waves of grain. The luck comes in the form of dice rolls, which determine what resources you earn. The strategy comes in when you choose where to build, whom to trade with, and what objectives you pursue (there are several ways to get to the requisite ten points for a win). My only regret about this game is that I once won 21 games in a row and now can’t get anyone to play it with me. Anyone want to come to game night?

Simplicity: Rules Written on the Card 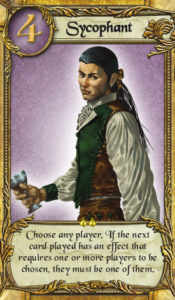 Simplicity is a virtue in any form of entertainment, especially entertainment designed to bring people together. Simplicity allows easy access to everyone, which increases the potential for bonding, and encourages lightheartedness, which makes for fun. Love Letter is the pinnacle of simplicity. A small red velvet bag contains 16 cards, each depicting a character in the royal court. Each character, if played, has an effect on another player. For example, the Guard gets to try to identify the card of another player. Basically calling out, “Who goes there?” If the Countess is caught with the Prince, she is banished, and the Handmaid always keeps the Princess’ secrets. The Priest hears confessions, the Baron snoops around, and the fun goes on. The players themselves become suitors, vying for the Princess’ love.
The object of the game is to win the heart of the Princess. The winner of a round wins a small red cube that comes with the game. We thought this was boring so I got some shiny plastic red hearts from Michael’s, and now we play with those. You can do one round or best of a million or whatever strikes your fancy. One round takes about ten minutes, and it is just fun.

Note: Some of the lady characters are garbed in alluring fashion, Renaissance style. *gasp* You could always play with your eyes closed.

Teamwork: Not Everything is a Competition!

Most games are competitions, pitting each player against all the others. But the board game world also proffers a genre in which the players team up against the game itself. This has the highly interesting effect of investing the players not only in the game but in each other. 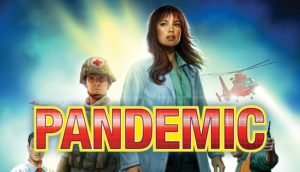 One of the best of these cooperative games is Pandemic. The board is a map of the world, marked by major cities and travel routes between them. The world is happy. It is connected. Everything is pretty and wonderful. And then five viral diseases break out simultaneously and threaten to destroy the world! Aaaaagghghhhh! You and your teammates choose characters, each of whom has a special ability (trade a card for free, move someone else’s piece, cure an individual city, etc.). Players attempt to control or eradicate the disease, but every time a player makes a move, the nasty diseases start throwing more germs around. The diseases can win pretty easily, so stick together, and hope that the sticky stuff is infectious!

Note: This game features some scary fictional diseases. Aaaaaaaaghhh! You could always play holding your breath. Or bring some kind of disinfectant to combat evil microbes.

And for the enterprising and adventurous, and those who skipped my witticisms and scrolled to the bottom, here are some more of my favorite board games, in no particular order. Enjoy!

Azul
Dominion
Ticket to Ride
Codenames
Biblios
Splendor
Taboo
Apples to Apples
Forbidden Island (My six-year-old loves this one)
And if you’re playing for the youngest crowd, Candyland is still the best!

Joe lives in Rockville with his dear family, a mountain of books, two mountains of board games, one or two stray spider crickets (where are the Daleks when you need them?), and a collection of 150 shot glasses. He can rave endlessly about the awesomeness of The Odyssey and The Tempest, much to the annual dismay of a bunch of unsuspecting sophomores. An avid fan of all things theatrical, Joe directs the Omnibus Players of The Heights School, as well as teaching Acting and Production Design. He received a B.A. from Thomas Aquinas College, an M.A. from University of Dallas, and is working on a Masters in Theatre Education at Catholic University of America. In his spare time he practices the fine art of taking 30-second naps. Omnia Omnibus!
Learn more about Joe Bissex →