The Art of Teaching: A Conference for Teaching Men

What should society do about economic inequality?

Does a larger empire make a greater leader?

What is the meaning of suffering?

What societal trends weaken a civilization?

How can we tell right from wrong?

The above questions are not the typical questions heard in a history class! What ever happened to “How many Confederate troops fought at Shiloh?” or “Which battle turned the tide and led to Napoleon’s eventual defeat?”

Tom Cox, Chris Breslin, and I—the faculty who teach the 8th-grade Core Humanities Sequence—spent the 2016-17 school year compiling an Ancient History Reader for the eighth-grade Core Class; the text takes an entirely new approach. Rather than focusing solely on the narrative, using interesting anecdotes to “make history come alive” (a rather cliché expression), the new text employs “history is stranger than fiction” anecdotes and gripping narrative as the starting point for a much deeper conversation and a much greater learning experience.

“Ah, Julius Caesar! Now there is a leader!”

Many students of world history learn that Hannibal’s brilliance defeated Rome at the Battle of Cannae. But why was Cannae fought in the first place? How had Rome survived against Hannibal for so long? Students delve into these questions more deeply using the Lives of Plutarch.

Similarly, Stoicism had a tremendous influence on the leaders of Rome and is often presented in counterpoint to the pleasure-seeking of Epicureanism. However. the primary sources show that Epicurus found wisdom far more satisfying than sensual pleasure, and the Stoic Marcus Aurelius was far from emotionless. With such accurate understandings of the culture of Rome, the conflicts of Julius Caesar, Brutus, Cassius, Antony, and Octavian take on new clarity for students.

Thanks to the research of the eighth grade Core teachers, supported by Dr. Matthew Mehan and Dr. Lionel Yaceczko students are not given summaries of the foundational ideas that defined ancient cultures. Instead, they read the texts and engage the ideas directly from the original sources. 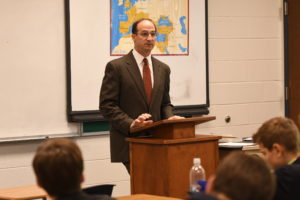 Students admire early descriptions of friendship in the Mesopotamian Epic of Gilgamesh. They learn Egyptian beliefs about the afterlife from translations of hieroglyphic texts. They learn Greek mythology from Hesiod’s Theogony and Homer’s Hymns to Apollo and further consider the limitations of the Greek religion in Plato’s Euthyphro. From the Psalms, they learn how the Hebrews prayed, and from the Proverbs, they learn how the Hebrew families remained strong from one generation to the next. Our young men ponder themes of freedom and fate in Aeschylus’s tragedy Agamemnon. They explore the connection between Greek and American values in Pericles’s Funeral Oration.

Each chapter of this compendium begins with a presentation of the beliefs that were foundational to the civilization, from the Greek values of aristeia (battlefield excellence), mētis (guile), and xenia (guest-friendship); to the Roman mos maiorum (the “customs of the elders”); to the pivotal Hebrew covenant with Yahweh and the Ten Commandments.

Too many ideas? Too few battles? Fear not: the great military achievements have not been sidelined. With the military expertise of Mr. Chris Breslin, students find themselves not on the sidelines but literally on the field. Mr. Breslin fashioned eighteen-foot-long Macedonian pikes (called sarissae) out of bamboo to drive home the brilliant military innovations and achievements of Alexander the Great, whose prudence and daring led to the spread of Hellenistic culture from Athens all the way to Alexandria (in Egypt) to Alexandria (in Iraq) to Alexandria (modern Kandahar in Afghanistan) to Alexandria (in Pakistan).

The Core includes classic debates on specific questions, as well as a recent innovation called the Core Seminar. This is, indeed, a college-level seminar in eighth grade, courtesy of Mr. Austin Hatch. The day after assigning a primary source for homework, the teacher enters the classroom, reads a passage or two from the source then puts a question and instructions on the board:

What should society do about economic inequality?

—Refer to the experiences in Sparta and Athens (Lycurgus, Solon, Cleisthenes, and Pisistratus).

Why did Rome lose the Battle of Cannae against Hannibal?

—Refer to the description from Plutarch’s Life of Fabius Maximus.

What is the meaning of suffering?

—Refer to last night’s excerpt from the Hebrew Book of Job.

Students then moderate their own discussion and try to reach a conclusion as a class by the end of the period. All of the eighth-grade Core teachers have commented on how respectful and insightful their student-led seminars have been.

Because they engage the material so deeply, students remember it much better. How will they forget the leadership of Themistocles at the Battle of Salamis, when only two days earlier they lost a debate as to whether Themistocles was a friend or foe of Athens?

Professor Eric Cline of George Washington University has lent his expertise to the project. Professor Cline has directed archaeological digs at Megiddo and Tel Kabri in Israel. Besides many past publications, he has recently produced an audio course with The Great Courses and a book called Three Stones Make a Wall describing archaeological discoveries around the world. For The Heights ancient history reader, he has proofread several chapters, recommended additional sources, and refined the presentation to make passages more accurate or more appealing.

Did you know that Babylonian financial records include the Hebrew King Jehoiachin’s tribute to Nebuchadnezzar? Did you know an Achaean arrowhead and unburied skeletons were found in the streets of the charred ruins of Troy from ~1100 BC? Did you know that the walls of Jericho show signs of destruction by earthly tremors? Thanks to Professor Cline, these archaeological discoveries, and many more, are included in the text.

Parents have also noticed the lively engagement their sons have with the material. Markus Guenther, father of Hans Guenther (class of 2020),  related a recent father-son exchange. After a missionary made an impassioned plea for donations. Mr. Guenther commented to Hans that the speech had moved him, and that it was a model for any good speech. “Of course,” replied Hans. “He used ethos, pathos, and logos. That’s how you convince people.”

The new ancient history reader will show the boys in living color—with masses of examples and counterexamples—what it means to be a civilized man. It likewise invites the boys to engage with tradition. so they can understand much, reject some, and embody the best from the past. In sum, the reader keeps the wisdom and experience of the ages from being lost.

Parents, alumni, friends, and even faculty have been asking, “Where can I get a copy for myself?”

The reader will be published as a textbook for any school that wants to offer its students the aforementioned benefits.

The first draft is finished, but revisions remain, not to mention obtaining permissions for translations and photos, and the graphic design (and redesign…and redesign). How do you spell “sabbatical”?

Bill Dardis joined the Heights faculty in 2011. After receiving a B.B.A. from Notre Dame and a commission in the U.S. Navy, Mr. Dardis worked as an IT consultant with Ernst & Young in New York. From 1996 to 2011, he founded several character development initiatives in St. Louis and Chicago. He has led service projects and summer camps in the U.S. and Mexico, including three Katrina Relief projects in his home town of New Orleans. In 2018 he founded the DC Accelerator, a life coaching and professional orientation program for recent college graduates. Mr. Dardis teaches the eighth grade Core Class, eighth grade Science, and seventh grade Religion.
Learn more about Bill Dardis →