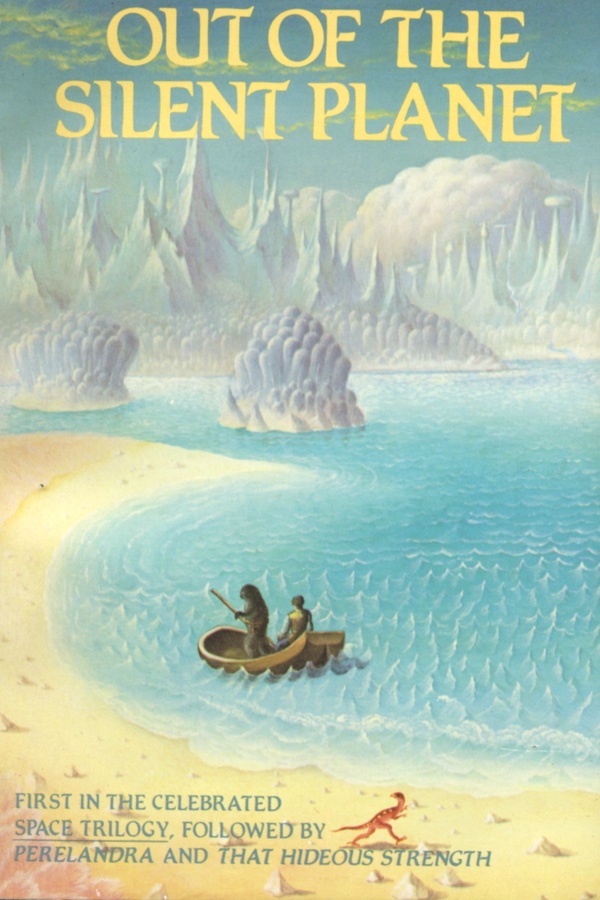 Recommended Age: 14+
Sci-fi
A review of C.S. Lewis's Out of the Silent Planet written by Joe Breslin.

“My people have a law never to speak much of sizes or numbers to you others, not even to sorns. You do not understand, and it makes you do reverence to nothings and pass by what is really great. Rather tell me what Maleldil has done in Thulcandra.”

-Oyarsa of Malacandra, Out of the Silent Planet

“Who are we? We find that we live on an insignificant planet, of a humdrum star, lost in a galaxy tucked away in some forgotten corner of a universe in which there are far more galaxies than people. We make our world significant by the courage of our questions, and by the depth of our answers.”

When Dr. Elwin Ransom, philologist and fellow of a Cambridge college, faces the prospect of being caught in the darkness of the English countryside without a place to sleep, fate and his own desire to help a frantic mother recover her intellectually disabled son bring him to the door of an ominous looking estate. As chance would have it, the place is occupied by an old classmate, Devine, and his associate, a world-famous scientist named Weston. Though it’s immediately obvious that something is wrong, Ransom has “all the deep, irrational conviction of his age and class that such things could never cross the path of an ordinary person…and could least of all be associated with professors and old school-fellows.” Not long after this, Ransom is swept up in drama of cosmic proportions and eschatological implications.

Whisked away though the Heavens, Ransom finds himself in Malacandra, a world whose extraordinary features shed light on our own. Science fiction’s particular strength lies in exploring the extreme possibilities of civilization, culture, and personhood. True to the genre, Lewis devotes a significant percentage of the text to illustrating Malacandra’s strange flora, fauna, climate, topography, and, especially, its alien races. Given the author’s high purpose, it would have been easy for him not to have written a true work of science fiction at all, but instead to have only played with the genre, using its superficial form as a mere wedge by which to drive home “The Message”, particularly since that message includes a profound critique of the scientism so typical of the genre itself. Instead, Ransom’s adventure in Malacandra is a thoroughly satisfying science fiction tale in its own right, meeting and even exceeding the expectations for the genre at the time it was written, and it manages to do this while at the same time profoundly critiquing the genre’s foibles. This is an enormous achievement.

Ransom’s interaction with Malacandra’s alien races and their social and economic structures are all necessary parts of the steadily moving plot, and Lewis deftly avoids the “information dump” that is one of the main narrative hazards in writing (and reading) sci-fi. Ransom’s struggle against the “bent” powers of the earth, in the form of Devine and Weston, remains gripping throughout, and even the long human-alien dialogs manage to be absorbing. Lewis can pull this off because the story’s central premise is so interesting: a man from Earth, “The Silent Planet”, goes to a world that has never fallen prey to Original Sin. Against the backdrop of this unfallen world, Ransom begins to discover what is truly natural and good, and what only seems natural because one lives in a bent world.

For example, there’s no element of political domination in Malacandra’s social order. No one people or group imposes its will upon any other. Yet neither are the Malacandrans pure “individualists”. Rather, each race, along with its many varieties and subdivisions, acts according to the habits and strengths proper to it, maintaining its own ways and traditions, while at the same time being naturally dependant on the virtues of the other races. There’s a mutualistic interdependence that leaves every group free, but which remains outwardly oriented, anticipating and being in a sense vulnerable to the complementary powers and virtues of other kinds.

The economic order also differs markedly from earth’s. Most notably, craftsmanship, and small-scale or collaborative enterprise seems typical, and there seems to be little in the way of factory-style mass production, at least not the kind that divides laborers from craftsmen. The pfifltrigg, a species of Malacandrian artisan, mine the very same materials they later work, dividing their time between all aspects of production, as opposed to the “more efficient” arrangement typical of earth wherein one large group does the mining, while another develops and sells what is collected. The pfifltrigg even express shock and wonder at the idea of an extreme division between the two.

Without the element of coercion that comes about as a consequence of sin, Lewis seems to suggest, the sort of division of labor typically deemed “normal”  or “most efficient” simply would not be possible. Moreover, it would be perverse for a craftsman not to have a personal knowledge of his materials, as comes from harvesting them himself.

Also incredible to the Malacandrians is the idea that anyone should go hungry. Lewis seems to view poverty itself as a consequence of injustice, and as a phenomenon at least indirectly related to the manner in which labor and craft are divided because of coercion:

“With us it lies very deep and hard to get and those who dig it must spend their whole lives on the skill.”

“I think not…I do not know. They are kept at it because they are given no food if they stop.”

Kanakaberaka wrinkled his nose. “Then there is not food plenty in your world?”

“I do not know,” said Ransom. “I have often wished to know the answer to that question, but no one can tell me…”

Fans of Chesterton and Belloc will notice what appears to be a similar critique of both the socialist command economy, and of the individualist “free” economy. Lewis’ unfallen economy includes a fair amount of personal ownership, and a fair amount of social cooperation, and yet it feels entirely natural, and not at all like a hodgepodge of two contrary systems. Neither collectivist, nor individualist, this economy is personalist.  But this is far from the only Chestertonian element in the book.

Chesterton wrote in Orthodoxy about the need to defend man’s dignity against the superstition of mere size, saying, “It is quite futile to argue that man is small compared to the cosmos; for man was always small compared to the nearest tree.” He goes on in the same chapter to criticize H.G. Wells for “making the heavens wicked.” Lewis’ entire Space Trilogy is partly a response, in narrative form, to the ideas of Herbert Spencer, H.G. Wells, and all their intellectual progeny. Weston embodies these ideals with eerie perfection. What is really striking, though, is that Weston’s evangelical materialism, and his soul-crushing cosmos worship is practically identical to that found in such contemporary militant atheists as Richard Dawkins and Daniel Dennett. Almost eighty years later, this intellectual virus has yet to be cured, and has been transmitted by an endless parade of  “science popularizers”, but anyone who reads Lewis’ Space Trilogy receives an effective inoculation against it. Here the demon is named for what it is: the resentment of the human person, masquerading as a love of human progress.

Speaking of personhood, Out of the Silent Planet’s best moments, those most illustrative of its themes as well as being the best examples of pure science fiction, involve the marvelous differences among the alien races. While Earth boasts only one kind of hnau—that is, rational animal—Malacandra has three (embodied) hnau species. Since each species of hnau is embodied differently, the rational soul is also realized differently among the three, leading to three very different varieties of personal intelligence. These intelligences are literary exaggerations of different intellectual temperaments, and it’s fun to see how each species’ mindset complements and contrasts with the others’.

This brings out what, to me, is the most beautiful aspect of the book: its profound meditation on variety. Malacandra is untainted by sin, so its denizens and features are completely good, but that does not mean they are boring; quite the contrary. C.S. Lewis shows us the music of creation, the drama of contingent beings. Since being good does not mean being all that is good, no one creature, no matter how good, reveals every aspect of goodness. The real differences among creatures results in a dance. There is tension, the tension necessary for a story, even among the unfallen. It is not a tension of conflict, but rather of contrast. So Malacandra isn’t a world without drama or without humor: on the contrary, it has these things in a fuller, purer form.

At the heart of C.S. Lewis’ acclaimed Space Trilogy rages the battle for the meaningfulness and awesome dignity of personhood against that hideous strength that would abolish actual persons, erecting in their place the worship of the supposed potentialities of the created will. It is a battle between that humility which, recognizing the specialness and awesome privilege of man’s embodied personhood, raises its eyes in gratitude and filial piety toward of the Father of All, and that other humility which, enamored of the world’s awesome size relative to man, and overcome by a creature’s littleness, is blinded to the wonder and value of persons themselves. Instead it pays reverence the power of man—of at least some men—to fight back against the tyrannical prison of nature, and against the tyrannical God who made it. This is a battle on the one hand between an order—personal, social, political, and economic—that is joy-full and peace-full because it is Maleldil-made, the organic product of God’s Logos, and, on the other hand, an inversion of that order, one that “seems right to man, but ends in death”, because it is the product of the self-made will.

There is a serious need for good literature that also directs us to the Good. It seems to this reviewer that defenders of the dignity of the human person would best expend their energies by being artists themselves, not just critics of the arts. Out of the Silent Planet, along with its sequels, Perelandra and That Hideous Strength, stands as an example of what is really necessary: good, entertaining, original literature that would grip any reader, and which also puts him or her in dialog with important truths. To do that, one must be immersed in the styles, forms, and craft of literature as it is practiced now, while at the same time being attuned to the sound of a higher music, all with an eye toward creating new art that will be consumed now. The battle to determine which ideas rule this planet takes place, primarily, in the arts, and those who wish to uphold the cosmic dignity of the human person must not remain silent.

Joseph Breslin is a fifth grade homeroom teacher at The Heights School. He graduated from the Heights in 2001, and attended Franciscan University of Steubenville, where he majored in English with a concentration in writing. Joseph was a teacher and coach at the Avalon School for three years, before coming to The Heights in 2011. He and his lovely wife Elizabeth have two sons, Julian Reuel, and Ignatius James. Joseph has helped coach varsity wrestling since 2011, and has been head varsity wrestling coach since 2013.
Learn more about Joe Breslin →