A Delightful Read with Educational Value 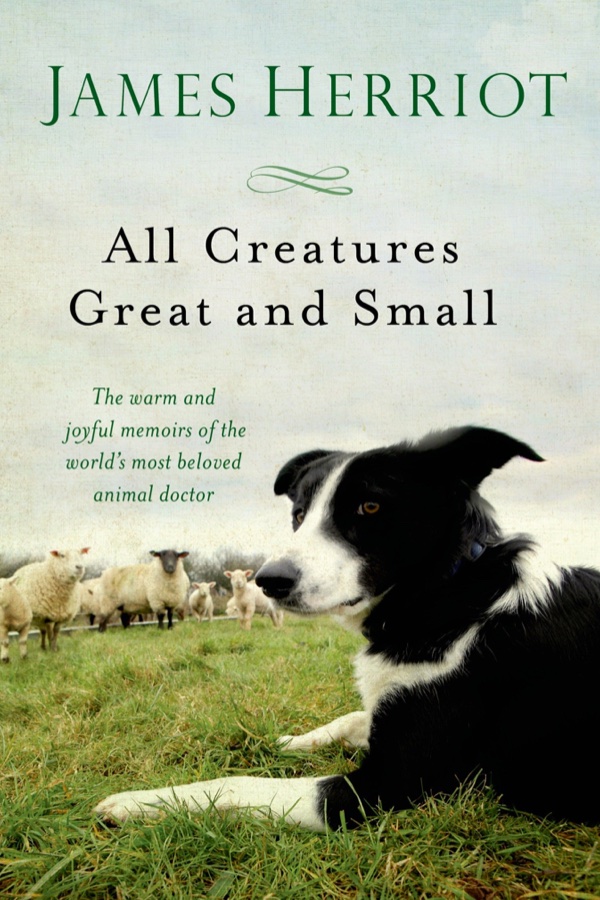 Recommended Age: 12+
A review of James Herriot's All Creatures Great and Small written by Robert Greving.

All Creatures Great and Small is the first book in a series of reminiscences by James Herriot, a veterinarian in the Yorkshire Dales region of England in the 1930s and 40s (James Herriot is his pen-name; his real name was James “Alf” Wight. Throughout the book, pseudonyms are used for various persons and localities). He is 23 and fresh out of vet school when he lands a job with Siegfried Farnon, a practicing vet in a small town in rural Yorkshire. The chapters take us episode by episode as he not only learns his trade, but learns to love the people and life of the Dales. Herriot weaves the main characters – himself, Siegfried Farnon, Siegfried’s rakish younger brother and veterinarian student, Tristan, and certain farmers and residents of the Dales – with vignettes of daily life as a vet. He neither dramatizes nor romanticizes the life, yet we are drawn into it. It is a hard life. While dogs and cats have their place in the stories, Herriot’s main clients were farmers, men whose lives were dependent upon their animals. Thus, Herriot is like a family doctor to hundreds of families, who not only have hundreds of children, but various types of children – sheep, cows, goats, horses and pigs. He is called upon at all hours of all days, and his skill can make the difference between a farmer thriving or failing. I confess I’ve always admired veterinarians. Their patients cannot speak to them. They must possess not only immense technical knowledge of many species, but also great intuitiveness. Many seem to have an almost saintly combination of gentleness, patience and strength. How else can you push a uterus back into a cow that has repeatedly kicked you across a paddock? And that is just with the animals. Herriot was dealing with blunt farmers whose livelihood depended upon his skill. If his treatments weren’t working – or, worse, hadn’t worked – they could come down on him, hard. His humility is evident. Herriot does indeed love the animals, but he also comes to love the people and way of life of “the Dales.” It is rustic life of “homely joys and destinies obscure”; of pubs and church socials; of horse racing and afternoon tea; of high mountain passes blocked with snow and valleys painted with heather; of friendship and family.  Many still cling to the old ways of treating animals (to Herriot’s dismay), and tell him so in their provincial Yorkshire dialect. (In one episode, a cow has stayed down for days and the farmer second guesses Herriot’s diagnosis saying, “Me dad used to say a strange dog would allus get a cow up.” The accents can make the book a fun one to read aloud with children.) One of my favorite episodes finds Herriot at the end of a grueling day aching, dirty and smelling of barn muck, longing for a bath.  As he soaks in the tub, he dumps in a jar of dainty bath salts left by the housekeeper.  Later, as he drifts to sleep (about midnight), he receives an emergency call from the father of the young lady he is courting. Once at the man’s farm, he is faced with the job of pulling out a calf from a contorted uterus. Soon, he is bathed once more – in sweat; but the aroma he emits, amongst these men smelling of tobacco, cows, and manure, is one distinctly exotic and feminine. He becomes acutely aware of the variance as well as of the wry looks and sniffs of the farm hands and his hoped-for father-in-law. He saves the calf and then asks the farmer for permission to marry his daughter, whereupon he is invited in for a whiskey. I began the chapter rolling with laughter and ended it with a tear in my eye. So why read the book? I can only call it “delightful.” Herriot makes this remote, difficult, and, on the surface, mundane life, both humorous and poignant. Thus he helps us to see that our own lives – often difficult and, on the surface, mundane – have humor and poignancy if we would only see it that way. The characters are memorable: his mercurial boss, Siegfried; Tristan, Siegfried’s younger brother and vet student, who seems to know the local pubs better than he knows animals, and gets in and out of scrapes more often than he cracks the books; the eccentric Mrs. Pumphrey, whose Pekingese dog Tricki-Woo repeatedly goes “flop-bott” (gets constipated), and repeatedly sends “Uncle Herriot” gifts of caviar and tobacco; Jeff Mallock, the “knackerman,” cheerful collector of dead animals for use in making soap (and other things).  These are just a few. Also, while I hate to use the word “educational” in a book review (usually a synonym for BORING), All Creatures Great and Small does teach a lot in an offhand way. I know one man who was so inspired by the series he became a vet. You learn much about animals and a rural way of life. Herriot is obviously a humble man, one that you would really like to meet; much of that rubs off on the reader which can only be a good thing. In its way, it is a “typical Heights book,” blending nature, humor, and ordinary life, and finding much that is worth contemplating in all three. Two disclaimers: First, as I said, this is a rustic life so some of the language can be … rustic. Second, some situations that Herriot gets involved with can be, shall we say, “adult,” such as when he helps a neighboring vet who is ill, and in calling on one of that vet’s clients discovers that she was expecting more than veterinarian services. This, though, can be another reason to read the book aloud with younger children so the parent can prudently skip those sections. By far, though, the book is a joy to read.